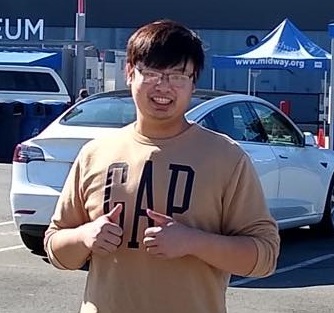 In this research, a study on balancing a self-driving bicycle will be introduced. Unlike other self-driving vehicles, the bicycle has a unique challenge in balancing itself. When the bicycle is standing, it falls under its own weight due to the small contact area between the bike and the ground. However, by mounting a fast-spinning wheel driven by a motor to the bike frame, we can control the motion of the wheel to counteract the torque generated by its own weight, and thus, the bike is balanced. The rotational motion of the wheel and the motor is controlled by our algorithm that received the bike’s roll angle, its falling rate, and the spinning velocity of the wheel to calculate the electric signal for the motor. The result from our simulation shows that our algorithm can bring the bike back to its vertical balance position from an initial 1.5 deg tilting angle. The bike with the wheel and the motor were then assembled for further tests. In practice, the vibration from the motor interferes with the sensor and causes major errors in the data. Thus, a 2-layer filter must be applied to eliminate the error caused by the motor’s vibration. The experiment data suggests that the wheel can bring that bike back to its vertical position, but due to unsuitable controller’s coefficients, our algorithm is still not stable enough to keep the bike at its balance position. Therefore, a further simulation with more accurate specifications will be conducted to achieve a set of more suitable coefficients.